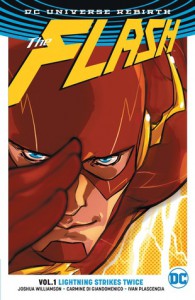 I think if I didn't watch The Flash I would have enjoyed this a bit more. Unfortunately for the book, I do watch the show. And that show has thrown speedster villains and allies out there a bit too often for me. Flash has such a fun set of villains with a diverse set of powers, but the show keeps focusing more on the speedster villains. So having the first story of Flash's Rebirth series have a ton of people in the city suddenly becoming speedsters and the big bad of the arc being one of the speedsters did not thrill me.

But I will give them credit for getting rid of most of the speedsters by the end of the book.

My personal feelings about an abundance of speedsters aside, I did enjoy some of the new characters introduced, particularly Flash's new speedster love interest who decided to start helping all new speedsters in the city. She was a sweetheart, and I liked her budding relationship with Flash.

I also really liked the new Wally here. He rubbed me the wrong way when he was initially introduced in New 52, but I grew to really like him after he went through quite a bit of character development, so I was happy that he hadn't lost that development. Wally struggles with his new powers here, and I very much look forward to seeing him continue to learn and grow as a superhero.

Flash's Rebirth series didn't have the best start for me, but I'm more hopeful for the next arc.