The Fangirl's Guide to the Galaxy: A Handbook for Girl Geeks 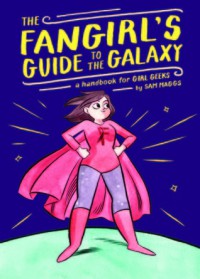 I'm not entirely sure who this book is intended for. It is advertised as being for fangirls, which one would think meant they were coming into the book with at least some basic knowledge of general fannish things. But the book reads as if it were for someone completely unfamiliar with any of it. I'm not even sure what age it's targeting. Some of the content seems meant for adults, but some sections seem like a younger group was in mind.

It's first chapter started by telling you about some of the most common things for girls to be fans of. The first thing in the list? Harry Potter. It then told me that to become a fan I should read the first book. It did the same thing with some other things like Star Wars (watch the movies), Lord of the Rings (read the books and/or watch the movies), Game of Thrones/A Song of Ice and Fire (watch the show/read the books), etc. Now with some of the broader topics, like anime, comics, YA books, or gaming, suggesting where to start made sense. However, those sections were too short to really give anything behind a handful of suggestions. (Also, some of the suggestions made me question whether the author had actually read everything mentioned.)

Others sections included sites on the internet and how to use them (think Facebook/Twitter/Tumblr/etc.), being nice on the internet, places to find fellow geeks, a chapter devoted to conventions, how to get your friends into fannish things, and a chapter on feminism. A lot of this information was either common sense stuff or things I already knew (or had no interest in). Which is why it felt like the book was written for someone totally new to everything. Even though the prologue of the book made it seem like it was for people who aren't.

The end of the book actually did give me what I had wanted more of from the whole book: suggestions for stuff to read/watch/play. It had a small section focusing on cool heroines in comics, books, movies, shows, and games that you should check out. Sadly, a majority of those suggestions were ones I already knew.

I was just hoping for more focus on the actual fandoms than this book gave. And I don't think I'm the intended audience for this book. Or maybe I am? Like I said, I'm really not sure who this book was meant for.