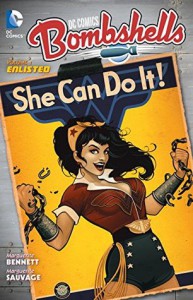 Based off a line of "Bombshells" variant covers and statues of the female characters done in 1940s pinup style, this comic book is set in an alternate universe during the Second World War. In this world, the female superheroes came first, and we follow them as they get their starts.

This book was a surprise delight. For a series based off a series of pinup pictures and statues, I was not expecting something so feminist. The women still face all the sexism that would have been typical for that time and get none of the respect they deserve, but that doesn't stop them from being amazing.

The book starts off with Batwoman who rescues the Wayne family when they attacked coming home from a movie, stopping Bruce Wayne's journey to being Batman right in its tracks and establishing firmly that this book was for the female superheroes. When not protecting the city as Batwoman, Kate Kane is the captain of a female baseball team and lives with her girlfriend Maggie who works with the police until she is recruited by Amanda Waller to join her organization: The Bombshells. Her first mission has her working with Catwoman

We switch over to the USSR where two sisters, Kara and Kortni (Supergirl and Stargirl respectively), join the Night Witches to be pilots in the war. But Kara must keep her powers secret, which becomes impossible when an accident while flying forces her to save her sister's life. The two are then forced to become Supergirl and Stargirl and fight for their country.

Over the island of Themyscira, an air battle between fighter pilots gets interrupted when the Amazons appear and kill everyone to protect their people from the bombs raining down on them. Diana finds the one survivor of the battle, Steve Trevor, who tells her of a terrible dictator threatening the world. She turns to her friend, Mera of Atlantis, to help her rescue Steve and save the world.

Zatanna finds herself facing the Joker's Daughter who holds a dangerous secret over Zatanna's head as she's forced to help her with dark magic. And John Constantine gets turned into Zatanna's pet rabbit.

Harley Quinn is on a mission to find her man and gets Poison Ivy to join her on in wreaking havoc across Europe along the way.

I adored every one of these women and loved every page of this book. It was just so much fun, and they all fit into their alternate universe roles so well. I especially enjoyed Diana and Mera's friendship and want to see much more of it. I don't think I've ever seen them be friends in the main universe, so this was a surprise, but a really nice one. And Mera sings to use her powers. She doesn't have to, but she likes to, and I am all for it.

The art is lovely, the characters are excellent, and the story is a blast. Overall, this series is a ton of fun, and I'm looking forward to continuing it.