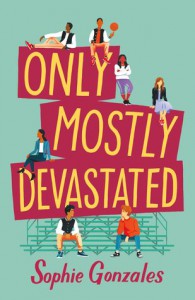 I think the best parent in Ollie's life is his aunt. She listened to him about his relationship problems and then got him to see that things weren't about him. Ollie was mad at the guy he liked, Will, for ignoring him after finding out Ollie's family had ended up staying in the area instead of going back to California like Will had thought. The thing was, when Will learned this, he also found out at the same time that Ollie had told multiple girls at their school that Will wasn’t straight when Will isn't out to anyone and understandably freaked out about this. Will had told Ollie he wasn't out to his family and, when he talked to Ollie later after calming down, explained that he's afraid his family will cut him off if they find out he's not straight. So Will was worrying about his survival. Ollie's aunt kindly reminded Ollie that not everyone had accepting families like Ollie did and he couldn't force someone to be ready to come out on his timetable.

As for Ollie's bio parents, well... Ollie tried to go to his mom for relationship advice. In response to a serious question, she sang "Let It Be" by the Beatles from start to finish and expected Ollie to listen to the whole thing. And that was her only answer. Ollie made a mental note to never try going to her for relationship advice again.

There's only been a single appearance of the dad and it was not good. He came in at about 40%. It was in the middle of the night and the aunt had to go to the hospital suddenly, so the parents were going to drop Ollie off at their house to watch his cousins while all the adults wen to the hospital. He came in Ollie's room and started screaming at him over nothing and eventually started cursing. He continued screaming over nothing until they left in separate cars. I understand this was a stressful situation, and you're not going to be at your best, but that doesn't make it right to take it out on someone else, especially your kid. It's even worse with Ollie's narration about it. We learn the cursing was a new thing that the dad had never done before, but Ollie said there's no point talking to him when he's like that, suggesting the screaming happened often enough that Ollie knew what to expect and how he needed to act around him to get through it. I've not seen any other scenes with the dad, so I don't have any other scenes to compare. This was all the author gave me - the dad screaming at the son a lot in a single, short scene and the implication that this happened regularly.

So my one impression of the dad was that horrible scene, and the mom has had a few scenes that I feel were supposed to come across as funny or quirky, but mostly made me sad for Ollie.